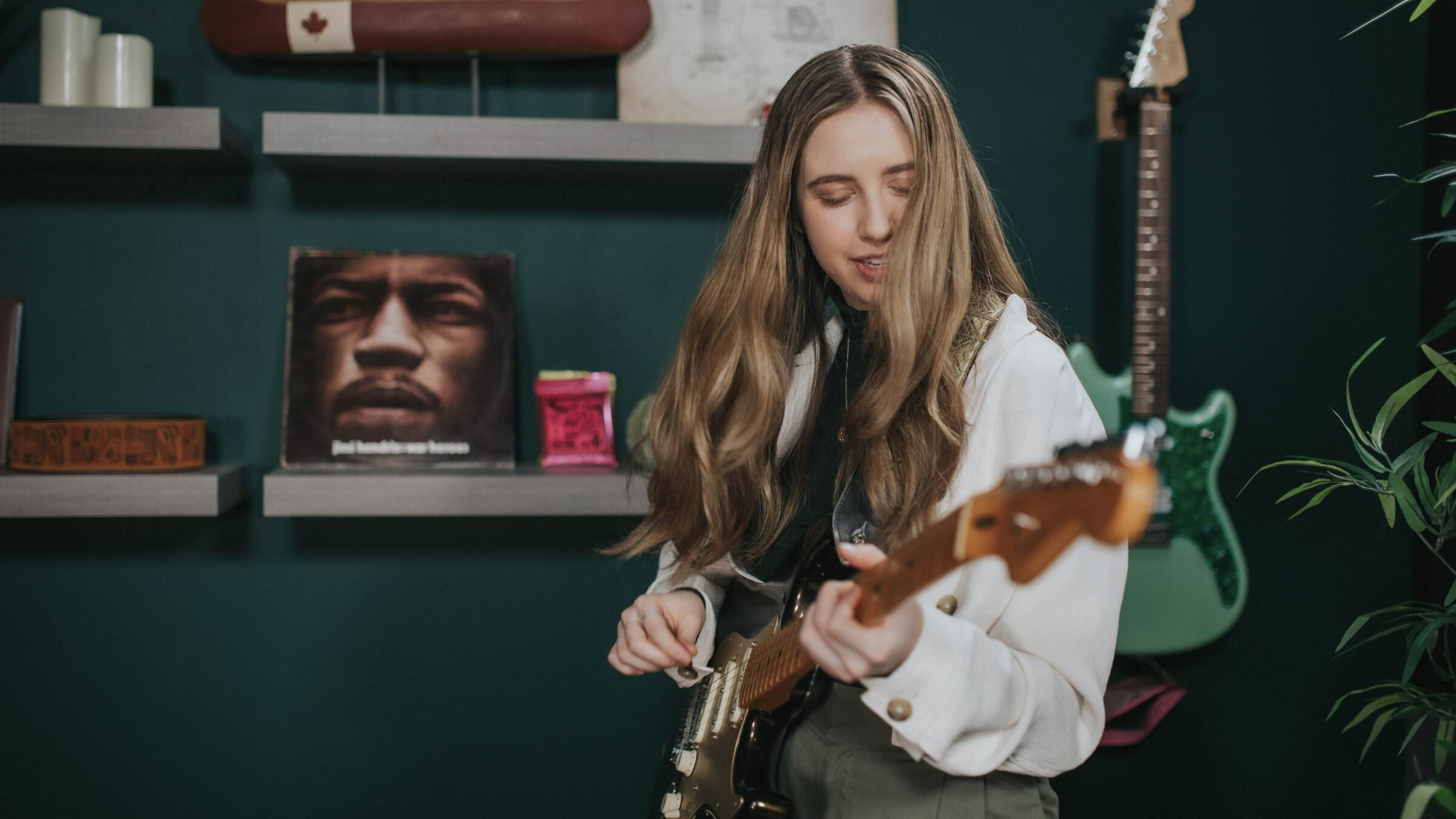 It’s no secret that here at Guitareo, we LOVE Jimi Hendrix. In his short, 4-year career, he was able to transform the guitar world forever. He innovated new wild techniques, popularized the use of mind-bending effects, and did it all in a beautifully soulful way. His songwriting and guitar playing has inspired armies of guitarists over the decades.

In this article, we want to highlight some of our favorite Jimi Hendrix guitar lessons. You’ll learn about Jimi’s most iconic riffs, his favorite guitar chords, and dive into his approach to songwriting and soloing. Let’s get into the videos!

Jimi was a master of writing incredible riffs. Even if you’re not a big fan of his, you can probably pick out a ton of his songs based on the intro riff alone! In this video, Ayla teaches you how to play six of Jimi Hendrix’s best riffs. We even have the tabs available for you to make each riff easier to learn.

The six songs you’ll learn in this lesson are:

Ayla is back with another Hendrix lesson that focuses entirely on his chords. This includes the essential E7#9 chord that everyone associates with Jimi’s playing. We’ll also take a look at some other chords that require the use of your thumb. Being able to use your thumb when you’re playing chords can be helpful for positioning your hand to play bigger shapes or to give your hand a break from playing bar chords (like in this lesson).

How To Play ‘Voodoo Child’ & Sound Like Jimi Hendrix

Voodoo Child (Slight Return) is a masterclass in guitar expression and technique. Many consider it to be one of the greatest electric guitar works of all time. In this lesson, you’ll learn exactly how to play the song in its entirety. You’ll dive into every technique, nuance, and concept so you can sound just like Jimi Hendrix.

Throughout the video, Ayla will cover Jimi’s approach to bending, hammer-ons and pull-offs, and some tricks for conquering the toughest parts of the song. The goal with this lesson is to be able to play the song and sound just like Jimi! Then you can take the things you learn here and apply them to your original songs or other songs you love.

The Most Underrated Jimi Hendrix Song

During his career, Jimi Hendrix recorded over 170 different songs! You’re probably familiar with the most popular ones, but we’re going to take a few minutes to appreciate one of his less popular tunes. “Angel” is a song featured on his 1971 posthumous album “The Cry of Love” and in this video, Ayla is going to perform it for us.

This song has a feel that’s pretty hard to nail. But there’s a lot that can be learned here about exercising patience in your guitar playing. If you love this song as much as Ayla does, you should consider taking the time to add it to your song repertoire.

The 5 Most Important Guitar Scales
With all the guitar scales out there, which ones do you actually need to know? In this article, we cover the five most important guitar scales that every player needs to know. Here, you’ll learn how to play the scale, the theory behind the scale, and some tips for applying these scales.

Guitar Music Theory Crash Course
If you’re not sure where to start with music theory then this is the place for you! This crash course leaves out all the extra mumbo-jumbo that causes guitarists to get confused when learning music theory. In this article, you’ll only learn about the things you actually need to know as a guitar player.

A Guide To The CAGED System On Guitar
Many of Jimi Hendrix’s chord-based licks come from the CAGED system. This system is also a great way to learn how to navigate the fretboard for playing solos or discovering new chord progressions. Get the full breakdown of the CAGED system in this article.

* FREE VIDEO SERIES *
Song In An Hour Challenge
Rob Scallon will lead you on an adventure with 9 free videos to gain the fundamentals, transition between chords, and play a full song from start to finish. Are you up for the challenge?

Andrew Clarke  /  Articles
The Top Guitar Chord Progressions
Chord progressions make up the backbone of any great song. A combination of the right chords can create a backdrop for a melody fitting of any genre or style.

Devin Dhillon, Andrew Clarke  /  Articles
Guitar Holiday Gift Guide 2021
If you’re shopping for a guitar player this holiday season, then you might be feeling a little overwhelmed by the sheer amount of options available to you when shopping for electric guitars, acoustic guitars, guitar amplifiers, and guitar accessories.  In this holiday buyer’s guide, we’ll give you this year’s best guitar gear recommendations for the […]

Guitareo  /  Articles
Guitar Music Theory Crash Course
Understand how guitar chords are made, how different chords fit together in a song, how guitar scales are made and why they’re important!