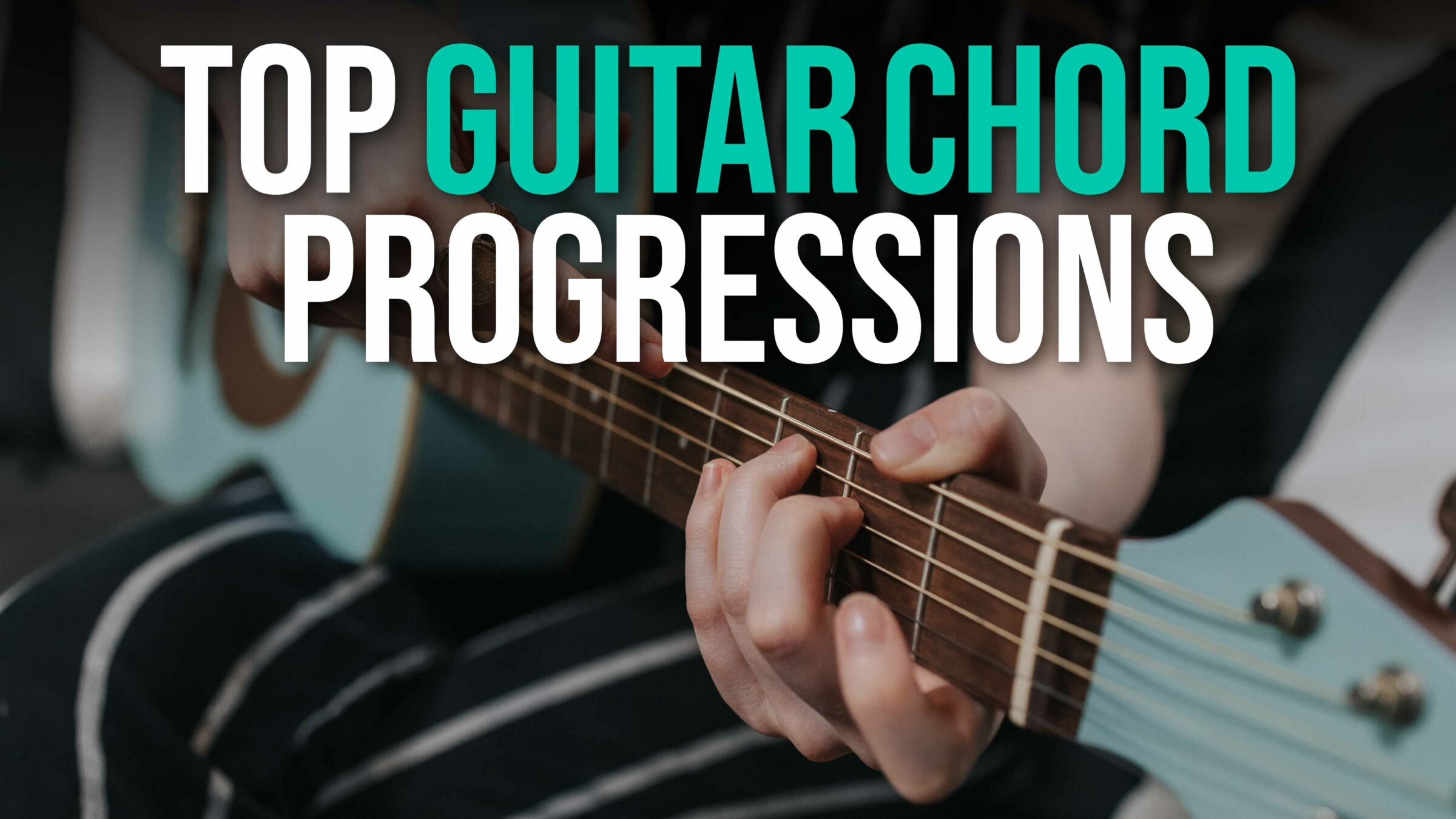 Chord progressions make up the backbone of any great song. A combination of the right chords can create a backdrop for a melody fitting of any genre or style. But not all chord progressions are created equally – and over time, a few have risen to the top as the go-tos for hit songs.

In this article, we’ll be diving into the top chord progressions you need to know on the guitar. They will span a bunch of different genres so whether you play rock, pop, or country, you’ll have at least a few solid options.

First and foremost, we’ll take a look at the most important pop guitar chord progression in existence. This is the 1-5-6-4 progression. There is a particularly entertaining performance by the band “Axis of Awesome” where they display just how popular this chord progression has been throughout modern pop music history. Check out the video:

A few of the songs they play are Don’t Stop Believin’ by Journey, I’m Yours by Jason Mraz, and She Will Be Loved by Maroon 5.

The crazy thing is that this video only scratches the surface. This chord progression is used in plenty of other songs you know and love. But before we go any further, you might be wondering what the numbers in “1-5-6-4” represent. Chords typically have a note name attached to them and these ones clearly don’t.

To understand why you’ll want to check out our music theory lessons before moving onto the rest of this guide. The best way to get it all in one place is to check out our 8 Steps To Understand Music Theory Guitar Lesson.

We will also get more into the music theory behind this in the next section. Now that you know the basics, we can get into the first lesson video.

Before we get into some of the other top guitar chord progressions, we’re going to dedicate an entire section to the famed 1-5-6-4 progression. First, we’ll quickly go over the theory of it.

The numbers here represent the chords from any major scale. When you write out the notes from a major scale, you can give each one a corresponding number and chord that fits into that given key.

Written out that will look like this: 1CMaj 2Dmin 3Emin 4FMajor 5GMaj 6Amin 7Bdim

We can apply that exact same formula to any other key. Let’s take D major for example.

Songs That Use This Progression

A few of the songs that use the 1-5-6-4 chord progression are Let It Be by The Beatles, Country Roads by John Denver, With Or Without You by U2, and Love Story by Taylor Swift. We’ve added downloadable chord charts for a few of these songs here: Chord Charts

It’s time to take a look at some more iconic chord progressions!

The 7 Chord Progressions That Changed History

In this video, Ayla Tesler-Mabe takes us back in time to look through some guitar chord progressions that changed musical history.

With most of these progressions, you’ll be able to get by with open chords, but it’s important to note that using bar chords will unlock a whole new level of understanding for you.

This is because the intervals between bar chords are the same no matter what key you’re in. For example, a 1-4-5 in C major using bar chords looks absolutely identical to a 1-4-5 in Eb major but it’s just played 3 frets higher.

If you aren’t familiar with bar chords yet, check out our Bar Chord Survival Guide.

#1: The Simpler The Better

The chords for a 1-4-5 in the key of C major are C major, F major, and G major. You can play these as open chords but if you’re able to you should try and use bar chords so these progressions become movable to other keys.

The next chord progression we’ll look at is known as the “50’s Chord Progression”. This progression added one more chord to the ever-popular 1-4-5 to create the 1-6-4-5. This new chord was a minor chord and immediately added more emotion to the songs that used it.

In the key of C major, a 1-6-4-5 uses the chords C major, A minor, F major, and G major. If you wanted to transpose this progression and play it in the key of D major, you simply have to move the bar chord shapes up two frets. This gives you D major, B minor, G major, and A major.

We’ve already covered this progression earlier in this article. But when you’re talking about chord progressions that changed history this one can’t be left out. If you’re going to learn just one progression then the 1-5-6-4 has got to be the one.

This progression really has stood the test of time and is still the most commonly used chord progression even in today’s modern pop music.

In C major, a 1-5-6-4 consists of C major, G major, A minor, and F major. Remember to use bar chords so you can move this progression around the fretboard to play in different keys.

The 2-5-1 is the most commonly used jazz chord progression. While this progression isn’t as straightforward as the others we’ve mentioned, it’s still used in pop music here and there.

In the key of C major, this progression is D minor, G major, and C major. But since this is a jazz chord progression we need to “jazz” up the chords a bit. To do this, we’ll make the D minor a D minor 7, the G major a G Dominant 7, and the C major a C major 7.

If you wanted to play this progression in a different key the shapes won’t change. Just move it up or down the fretboard so the root notes line up with your desired key.

Here’s where we start getting a little spicy. This chord progression utilizes something called Modal Interchange. This term might sound a little terrifying but don’t think too hard about it. In simple terms, it just means we’re going to add a chord from outside the key.

This is called a “Minor 4” chord since the 4 chord would normally be major.

Now we’re really getting out there with this one. Brian Wilson wrote a song called “The Warmth Of The Sun” that was performed by The Beach Boys. In this song, the chord progression fully modulates up a minor 3rd before returning to a 2-5-1.

For the final chord progression, we’ll be looking at something that’s more of a songwriting technique than a progression. Stevie Wonder is famous for using this trick and it can be found in a lot of his music. This technique is particularly popular in musical theatre as well.

The trick is to take an existing chord progression and progressively move it up a semi-tone (1-fret) every time you play it. “Golden Lady” is a great example of this. The progression is G minor, G minor (major 7), G minor 7, G minor 6, then land on an Ab major 7. The next time you play the progression everything will be up a semi-tone. And you can keep repeating this pattern to get the desired effect. This progression was pretty groundbreaking at the time and is something you may want to consider adding to your songwriting toolkit.

We hope you enjoyed this guide on the top guitar chord progression. You should now be pretty well-armed with a bunch of progressions that you can use to write your own music. Here are some more guitar lessons we think you’ll love.

If you went through this article without knowing how to play bar chords then you should check out this guide. Bar chords unlock a whole new type of freedom on the fretboard and pair particularly well with the concepts we went over in this guide. Whether you’re struggling with playing clean bar chords or you’re brand new to bar chords altogether, this is the place for you!

5 Most Beautiful Chords For Beginners

Expand your guitar chord vocabulary with this lesson from Ayla Tesler-Mabe. You’ll learn new guitar chords that are easy to play for beginners but will make you sound like a pro! If you feel like your chord progressions are lacking some zest, then this lesson is perfect for you.

If you love Jimi Hendrix then you’ll love this video lesson! Ayla shares her favorite Hendrix chords and you’ll even learn how to use them in your own original music.

* FREE VIDEO SERIES *
Song In An Hour Challenge
Rob Scallon will lead you on an adventure with 9 free videos to gain the fundamentals, transition between chords, and play a full song from start to finish. Are you up for the challenge?

Devin Dhillon, Andrew Clarke  /  Articles
Guitar Holiday Gift Guide 2021
If you’re shopping for a guitar player this holiday season, then you might be feeling a little overwhelmed by the sheer amount of options available to you when shopping for electric guitars, acoustic guitars, guitar amplifiers, and guitar accessories.  In this holiday buyer’s guide, we’ll give you this year’s best guitar gear recommendations for the […]

Guitareo  /  Articles
Guitar Music Theory Crash Course
Understand how guitar chords are made, how different chords fit together in a song, how guitar scales are made and why they’re important!