A Guide To The Pentatonic Scale On Guitar 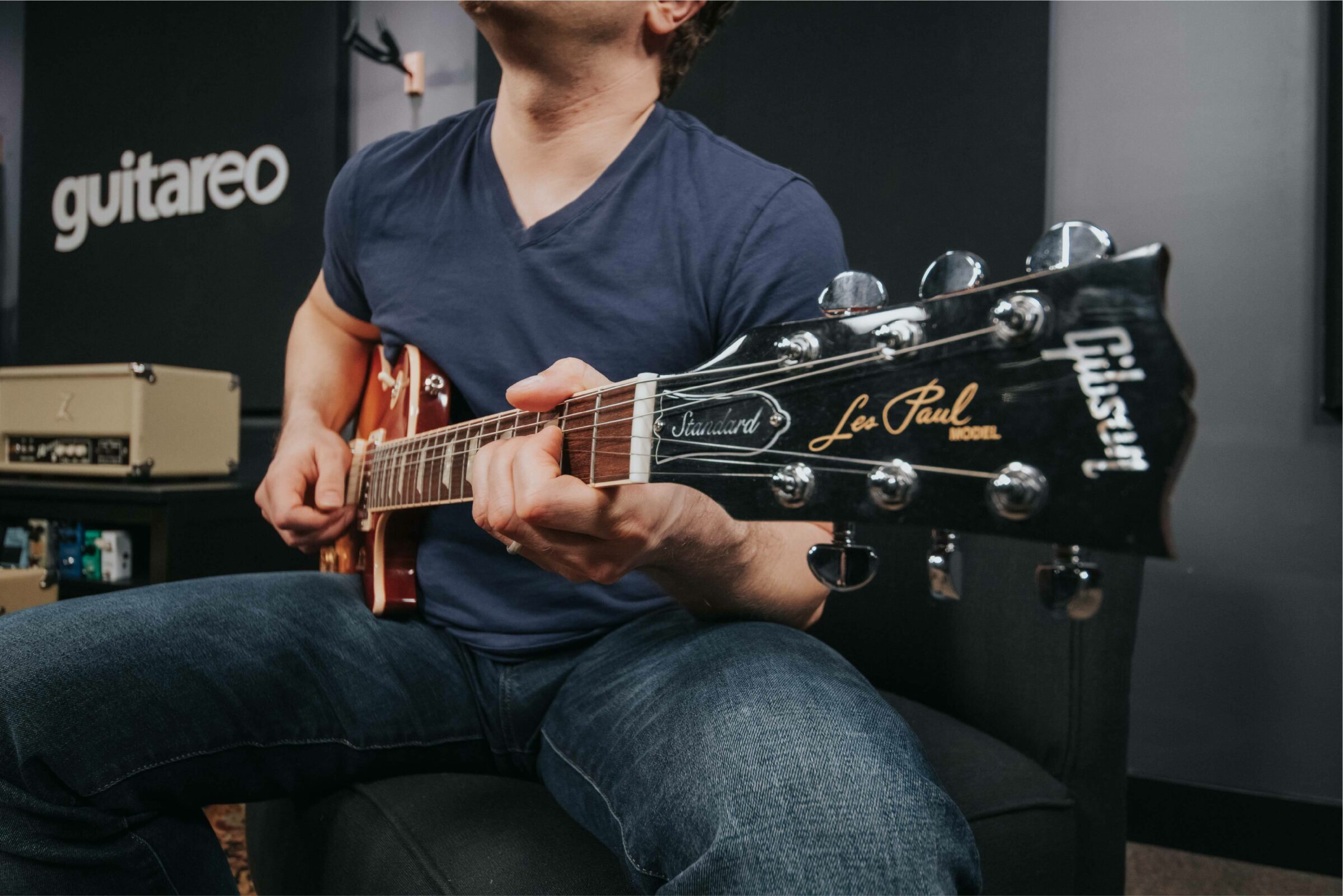 Of all the guitar scales you’ll learn, the pentatonic scale will likely become your favorite. This scale has been the basis for thousands of amazing guitar solos over the years and is the perfect tool for you to use to begin coming up with your own solos.

Removing these notes changes two of the more colorful intervals in the scale so that the notes in the scale can be used more freely. This way, you don’t have to worry so much about landing on an “off” note while improvising and soloing.

The first two video lessons of this guide are part of a larger 12-part series called the Lead Guitar Quick-Start Series. If you’d like to get into some of the other aspects of lead guitar like vibrato, bending, and other scales, it’s going to be your best bet. Let’s get into the first lesson about the major pentatonic scale.

The scale shape requires a little bit of dexterity since you’ll be using all four of your fingers in different patterns across each string. Start off slowly and learn the shape one string at a time. Here’s the full diagram for a G major pentatonic scale:

In case you aren’t familiar with root notes, the black circles in the diagram represent the G notes within the scale. These root notes will always share the name of the scale. In this case, the root notes of a G major pentatonic scale shape are Gs.

If you use the root notes (black circles) as a reference for where the scale starts, then you can see that the five notes are repeated a little over two times over the span of almost two and a half octaves.

We’ve included a jam track for you to use to play along with while practicing this scale. It helps you to better internalize the shape and makes boring exercises like learning guitar scales a lot more fun!

The second version of the pentatonic scale is the minor pentatonic. This scale shape is likely going to be the one you use the most when you get into playing guitar solos. The reason that this shape is so popular is that it’s so darn simple!

The six-string shape contains only two different patterns that make it easy to get under your fingers and even easier to memorize. Here’s the shape:

Download the jam track we’ve included above and practice this new scale shape along with it. You’ll want to have both the major and minor pentatonic shapes down before you move onto the next part of this guide.

At this point, you should know two of the five total pentatonic scale shapes. These five shapes span twelve frets before repeating and are all connected to one another.

A good way to visualize it is to think of all the places you could possibly play the five notes from the scale across the entire fretboard. If you put them all together, you’d get five different shapes within twelve frets.

Shape #1: The first shape is one you should be familiar with already. Position one of the major pentatonic scale is based on an E major shape G major chord. If you compare the scale to the chord, you can see how the shapes fit on top of one another. The scale contains all the notes from the chord and includes a few others from within the key.

You’ll find it helpful to try and visualize the chord shapes whenever you look at a scale shape. This will help you memorize the scale and also help you to see where the root notes are.

Shape #2: For the next shape, you’ll notice that it begins where shape #1 ended. Take note of the root notes in this shape, and you’ll see that the scale perfectly outlines a D major shaped G major chord.

As you move from one shape to another, you should pay close attention to how each shape connects to the next. As your guitar skills grow, you’ll be weaving in and out of shapes constantly and not just sticking within one.

Shape #3: As we continue up the fretboard, we get a pentatonic shape that outlines a C major shape G major chord. Every shape is still just that same five-note scale repeating through different octaves. The G notes are still displayed as the black circles since this is still a G major pentatonic scale.

Shape #4: Here comes another shape that’s easy to remember. It has only two patterns across the six strings and outlines your standard A major shape bar chord. As with the previous shapes, be sure to look at the connection points between shape #3 and shape #4.

Shape #5: You might be wondering where that minor pentatonic scale shape fits into all of this. Well, the minor pentatonic shape is the fifth and final shape in the sequence. You’ll see that it looks a little different than the G minor scale shape since it’s not on the third fret. That’s because that shape is a G minor and not a G major. The G major version of this shape outlines a standard G major chord.

Depending on how much you know about music theory, you might be familiar with major and minor keys and how they relate to one another. If this is a new concept to you, then we’ll give you a quick explanation.

So your five G major pentatonic shapes are quite literally the same five shapes as the E minor pentatonic scale. The only difference is that you’d consider your root notes to be the Es instead of the Gs.

Here’s an E minor pentatonic scale where you can see it’s precisely the same shape and location as the fifth G major pentatonic shape:

And that’s it for this guide to playing the pentatonic scale on the guitar. You now have a complete understanding of all the major and minor pentatonic shapes. This is just the tip of the lead guitar iceberg and there is plenty more out there for you to have fun with. Keep scrolling for even more guitar lessons on the pentatonic scale.

You know all the pentatonic shapes, but how do you tie them all together to sound like your favorite guitar players? Learn all about the connected pathways between the pentatonic scale shapes with this lesson from Nate Savage.

Embark on a minor pentatonic journey with Ayla Tesler-Mabe. Learn tips and tricks for breaking out of the pentatonic box so you can improvise solos with more feeling and emotion.

A Guide To Improvising Guitar Solos

Go from zero to guitar hero with this comprehensive guide on improvising guitar solos. You’ll start at the very beginning with just a small scale shape, and by the end, you’ll be creating your very own original solos on the fly!

Get 9 of our highest quality members-only video courses totally free! Learn essential lead guitar techniques, how to play your first real solo, how to read sheet music, and more! Just click on the link above to get your guitar lessons right now.